If ever there was a match that epitomised the continental way of playing, the Spurs v Swansea match has to be up there among one of the clearest pieces of evidence. There was no "throwing it in the mixer", hoofing it upfield or route-one football. There were rather two teams coached by two foreigners that keep trying to instill the values of keeping the ball on the ground and their passing short and sweet (even though both teams haven't been exactly Stoke-ish over the past few years). For the average English fan and/or viewer - used to more action-packed matches -, it must have been quite a hard penance.

Swansea were at their best for the first 15 minutes. With Spurs trying to pressure high up and to keep their opposition from getting into their passing rhythm, Michael Laudrup's team were very good at avoiding ressure and looked extremely comfortable on the ball, including all of their back four, with De Guzmán doing excellent work dropping off in order to overload Spurs' midfield duo of Sandro and Dembélé. 15 minutes into the match, the possession stats read 60% for Swansea, even though the match was at White Hart Lane. 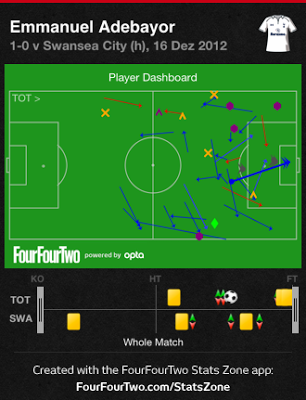 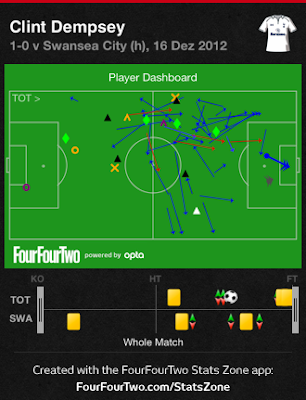 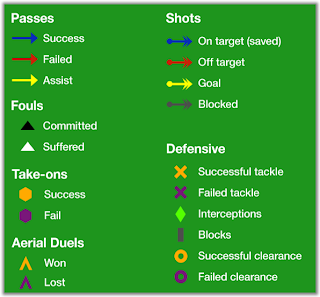 Nevertheless, Spurs' chances were bound to come from the right flank, with Kyle Walker and Aaron Lennon the main providers. Dembélé, who excels at gliding past his opponents, was a bit off pace today, even though his game was very interesting throughout. 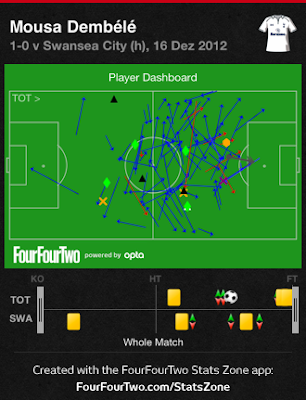 With little creativity from midfield, AVB needed "drivers" - players who can push the team forward with sprints and take-ons, especially with Bale sidelined. Even though Lennon would seem to be the man for the job, his last touch and decision-making process keep letting him down, often squandering excellent opportunities. 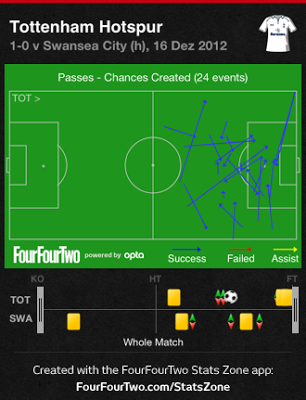 Despite the excellent start to their match, Swansea found themselves pinned back, the odd counterattacking menace notwithstanding. As stated when the Welsh team played against City, Routledge, De Guzmán and Michu are very good players, especially on the break - and there were clearly glimpses of that today. However, the fact that they were playing and defending so deep increased their difficulty at taking the game to the Londoners.


In fact, Swansea were defending so deep that the number of tackles, interceptions and blocks made inside and near the penalty box would be more indicative of an Italian team playing their usual brand of counter-attack, something the Welsh were forced to by Spurs' growing pressure. 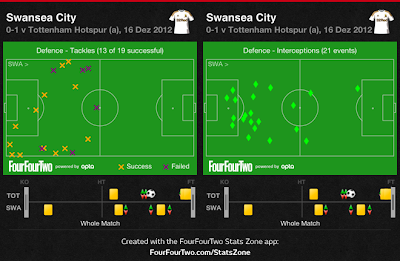 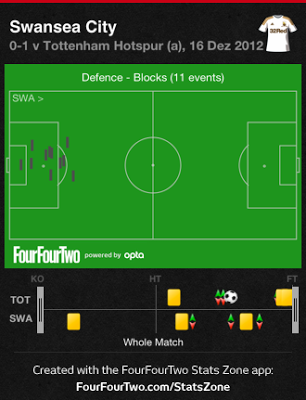 This was indeed a much-needed victory for Spurs' aim to get into Champions League positions, especially after their dramatic defeat at the hands of Everton last weekend. Despite the good result, AVB still has much to do, since their team remain (a bit less, to be honest) prone to lapses of concentration while getting the ball out from the back and too nervous while trying to close up shop after they get ahead. Andros Townsend's display was positive and may provide relief on the wings for the manager (and Lennon, as well), who will also welcome Parker's return to the fold, particularly for the ever so demanding two upcoming weeks.
Posted by Vasco Mota Pereira at 4:42 PM No comments:

A new piece on Hulk and why he may never play where he dreamt of is already up on Sabotage Times.
Posted by Vasco Mota Pereira at 11:43 AM No comments:


After failing to score against Barcelona and following Celtic's narrow win against Spartak Moscow, Benfica are out of the Champions League. The Eagles' were penalised by their profligacy and will have to keep fighting for an European trophy in the Europa League.

On the wrong side of the odds and faced with an uphill battle, Benfica had to at least get the same result as Celtic against Spartak Moscow. Their task was made a bit easier by Tito Vilanova, who rested several key players (including Messi, Xavi, Iniesta, Busquets, Dani Alves and Piqué) and instead gave his second string valuable minutes in the Champions League without the inherent pressure of a result.

The feeling that that would play right into Benfica's hands was confirmed as soon as the match started. Unlike what they did in their own turf (oddly enough), the Portuguese team came with a intense pressing approach out of the gate, pinning Barcelona back. With Pinto in goal instead of Vítor Valdés and with a makeshift back four, Barcelona found it hard to play out from the back, particularly under the pressure of Rodrigo, Lima, Ola John and Nolito. Even the young tyro André Almeida was pushing high up, tracking Alex Song when he (or another midfielder) dropped back to try and provide an out-ball.


Benfica were solid and defensively aggressive, managing to win numerous balls back, due to their intensity. The Catalans B team are clearly not as good or used to playing together and often misplaced passes. On top of that, Benfica were quite cleverly exploiting the space behind the centre-backs, who, according to the team's principles, remained deployed in a high defensive line - but often with little pressure from their midfield.

Benfica's first clear-cut scoring chance came on the 11th minute, with Rodrigo getting behind the defence and then selfishly choosing to shoot instead of playing the ball to Nolito, who was furious at his team-mate. The same Nolito provided a lovely cross for Lima to head wide ten minutes later. Barcelona started showing their teeth shortly afterwards when they successfully found their way out of Jorge Jesus' defensive maze: Matic would stick to the highest midfielder, André Gomes would track the one dropping back, but the third one (usually Sergi Roberto) was always free to collect the ball and break past Benfica's midfield, as proven by their opportunities on 23 and 24 minutes.


Benfica, however, kept their foot on the throttle and remained adamant at pushing forward - and almost got the reward for it, with Lima hitting the post on 31 minutes, after Adriano's well-timed tackle fortuitously found the Brazilian forward's foot. A few minutes later, Lima would become the provider of a beautifully placed long ball towards Ola John, who turned his opponent inside out, but allowed Pinto another good save. Whenever Jesus' men got the ball out wide, their opponents' knees buckled.


The second half was a whole different game. Benfica started to tire out and their pressing was not as effective. Therefore, Barcelona found it easier to get into their usual passing rhythm and find chinks in Benfica's armour. With Ola John and Nolito offering less and less protection to their full-backs, Tello ran riot against Máxi Pereira, who seemed to lose his temper once or twice, but managed to keep it together. Also, Lima and Rodrigo remained high up, which meant that the trio of Song, Sergi Robert and Thiago Alcântara had the necessary space and time to pick their passes. Fortunately for Benfica, this group of players' timing for the through-ball was not as accurate as it usually is, allowing Benfica to successfully deploy the offside trap.

Messi came in after 58 minutes (with Villa going right) and immediately drew several fouls just outside the box - and he was also more dangerous at providing key passes for Villa or Tello. Messi himself would get into an excellent position to score, but Artur's brave save avoided the worst for Benfica, with the Argentinean being stretchered off after that duel. By then, Benfica had already changed into a 4x3x3 shape, with Matic behind André Almeida and André Gomes, and Bruno César and Ola John on the wings supporting Cardozo.

Benfica wasted a very good chance not only to win at Nou Camp, but to progress into the next stage. They benefitted from a perfect storm, with Barcelona fielding a team comprised of youngsters and second-string players. The Eagles have only themselves to blame for not scoring on (at least) one of the several opportunities they had to lock the score. The Europa League awaits - and with it another shot at an European trophy.
Posted by Vasco Mota Pereira at 10:47 PM No comments: