Last Tuesday night FC Basel were comprehensively beaten by FC Porto, a match that was analysed soon after the end of the match. But sometimes words fail to paint a proper picture that helps explain where exactly the difference lay between the two legs. An attempt to put it into context follows below.

There's always a risk while praising a player for one isolated performance but here Vincent Aboubakar was certainly a linchpin for FC Porto's attacks throughout the match. Whether acting as a wall off of which his team-mates could bounce their passes or getting himself into scoring (or at least finishing) positions, the Cameronian's ability - and willingness - to make himself available to open passing lanes meant that Jackson Martínez was not as sorely missed as one might think. Whether this was a one-off evening or just a taste of just what Aboubakar is capable of remains to be seen. If Jackson Martínez leaves, as expected, the former Lorient man will certainly have lots more opportunities. 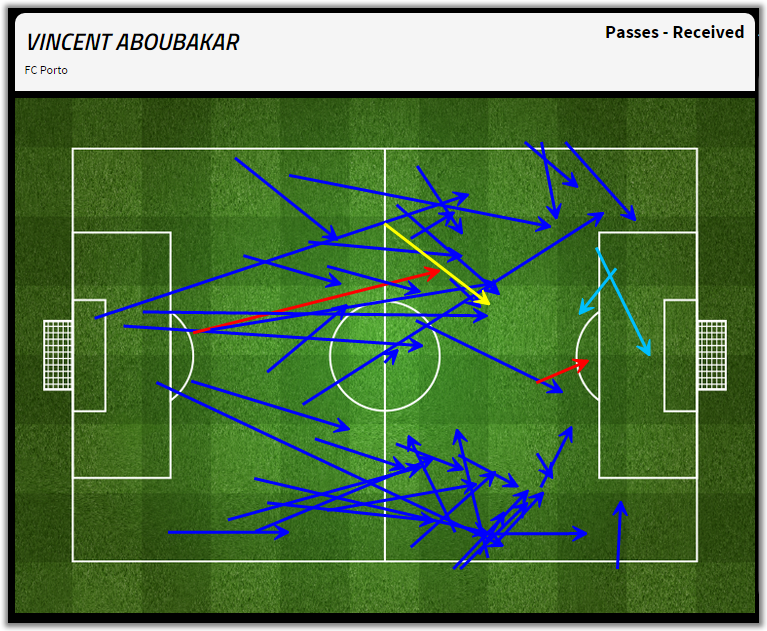 At the press conference, Julen Lopetegui claimed that the team adjusted their strategy according to their opponents - something that is not exactly groundbreaking, but that has sometimes been hard to notice when FC Porto are concerned. Last Tuesday there was clearly a change of tack and the centre was a much more fertile ground for scoring chances. The wings were still the starting point for attacks, but more as a decoy - usually through the seemingly unshakable Brahimi - so that FC Basel's centre could become vacant. 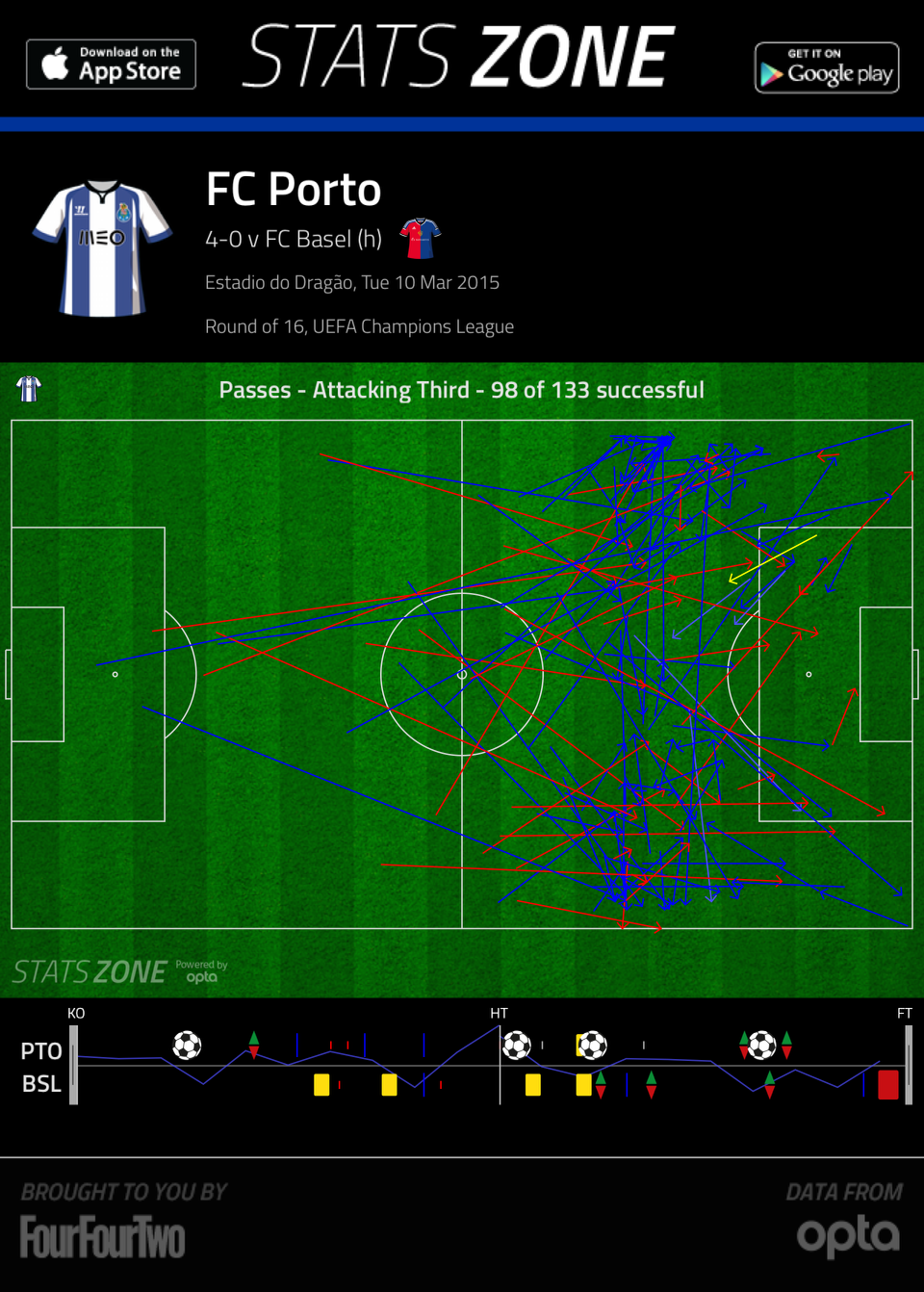 Contrary to what has been the norm so far, decent chances came from the middle, rather than the wings. The Dragons kept wreaking havoc with an approach that worked wonders throughout the whole 90 minutes. 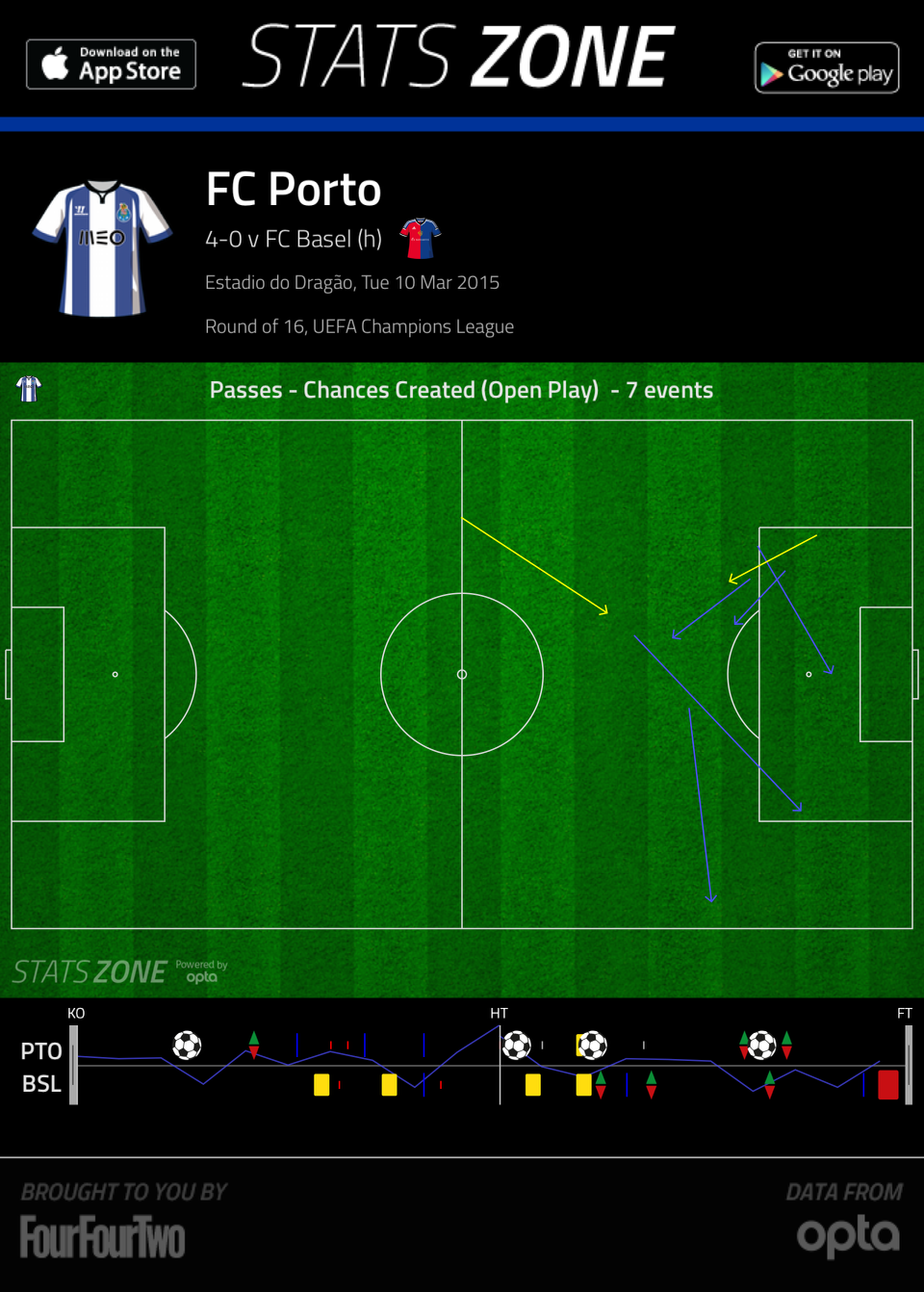 Just in case there remained any doubts, the chalkboard below compares the number (and origin) of crosses over the the two legs and certainly helps explain FC Porto's different approach against Paulo Sousa's FC Basel. 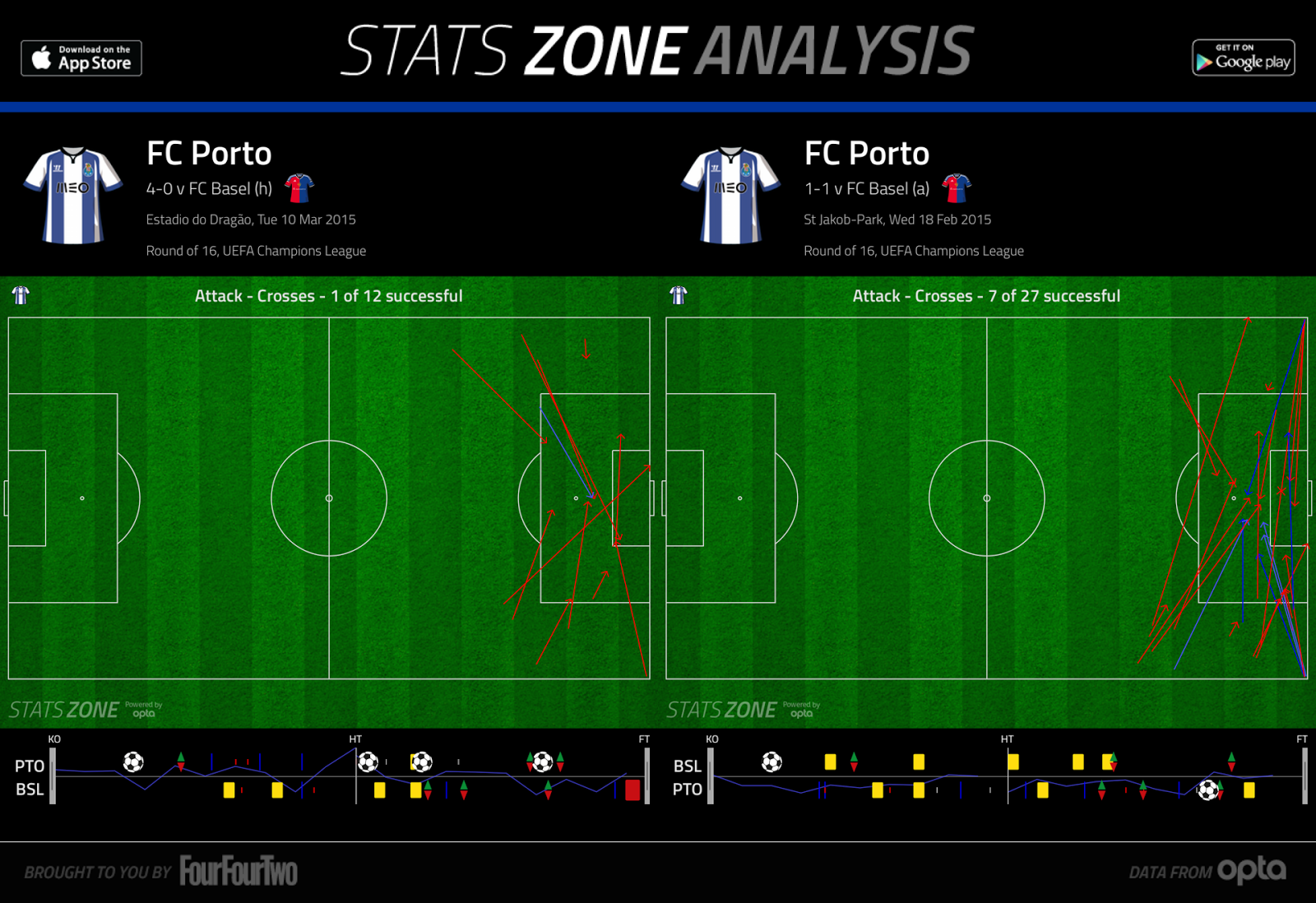 Another noticeable aspect was how less involved Cristian Tello was when compared to his counterpart down the left, Brahimi. Without space to run into, the Spaniard winger is sometimes frustrated all too easily (even though the run that drew the foul for the first goal was his). Even his team-mates seem to be aware of that and, consciously or not, tend to seek Brahimi for the out-ball. On the other hand, it is quite easy to see how many dribbles (stars) the Algerian attempted and how he invariably sought his team-mates with passes inside. 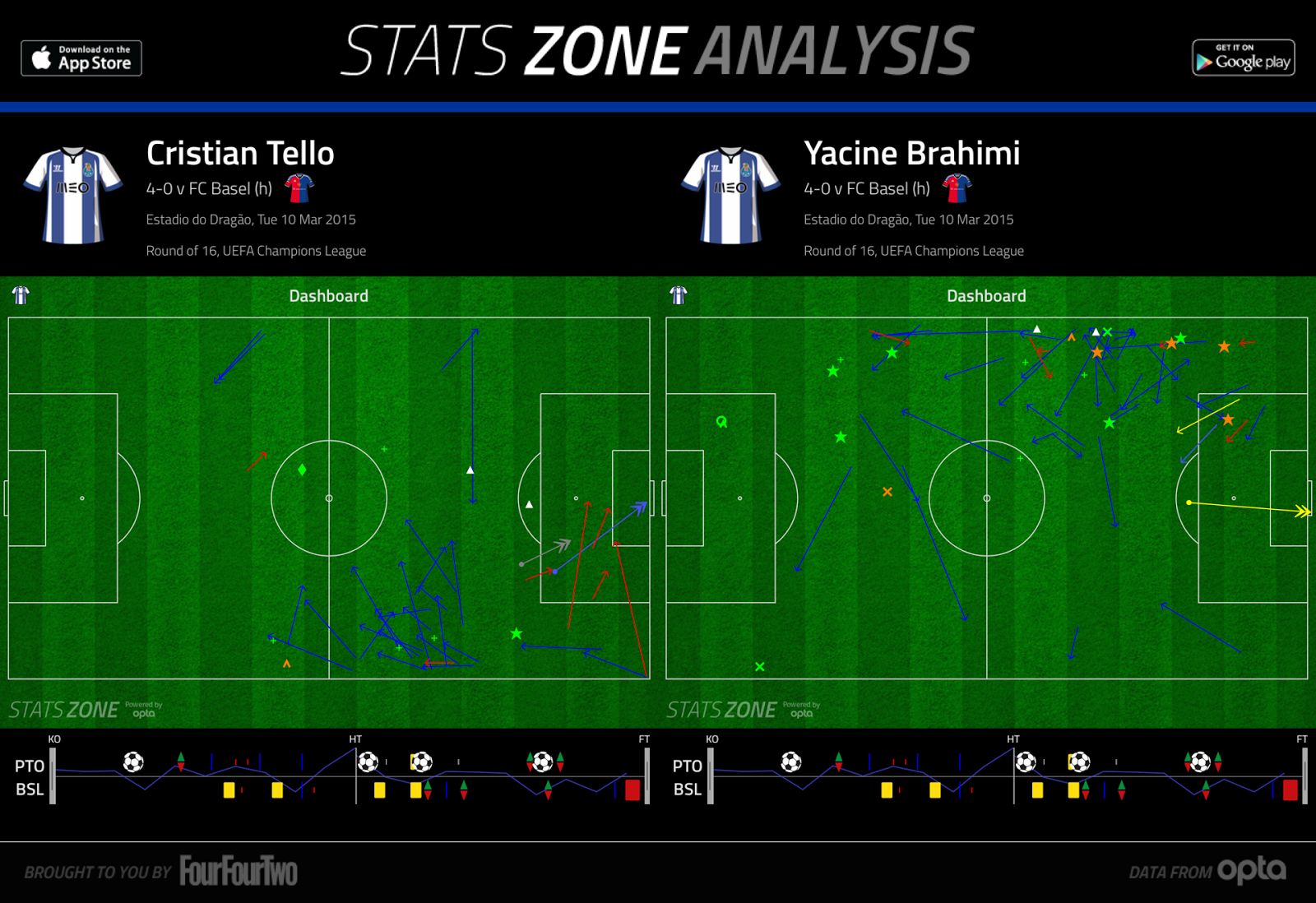 It hasn't been the easiest of seasons for former Estoril man Evandro. With Óliver Torres and Herrera in front of him in the pecking order, he's been usually limited to come on for the last 10-15 minutes of matches. Here, however, he was able to make the most of a few consecutive starts following Óliver Torres' injury in the first leg against Basel and his silky touch and intelligent positioning enabled him to find pockets of space to receive the ball in, as well as distributing it calmly and wisely. Playing mainly left of centre, he combined well with Martins Indi and Brahimi, and was able to keep FC Basel's midfielders guessing. 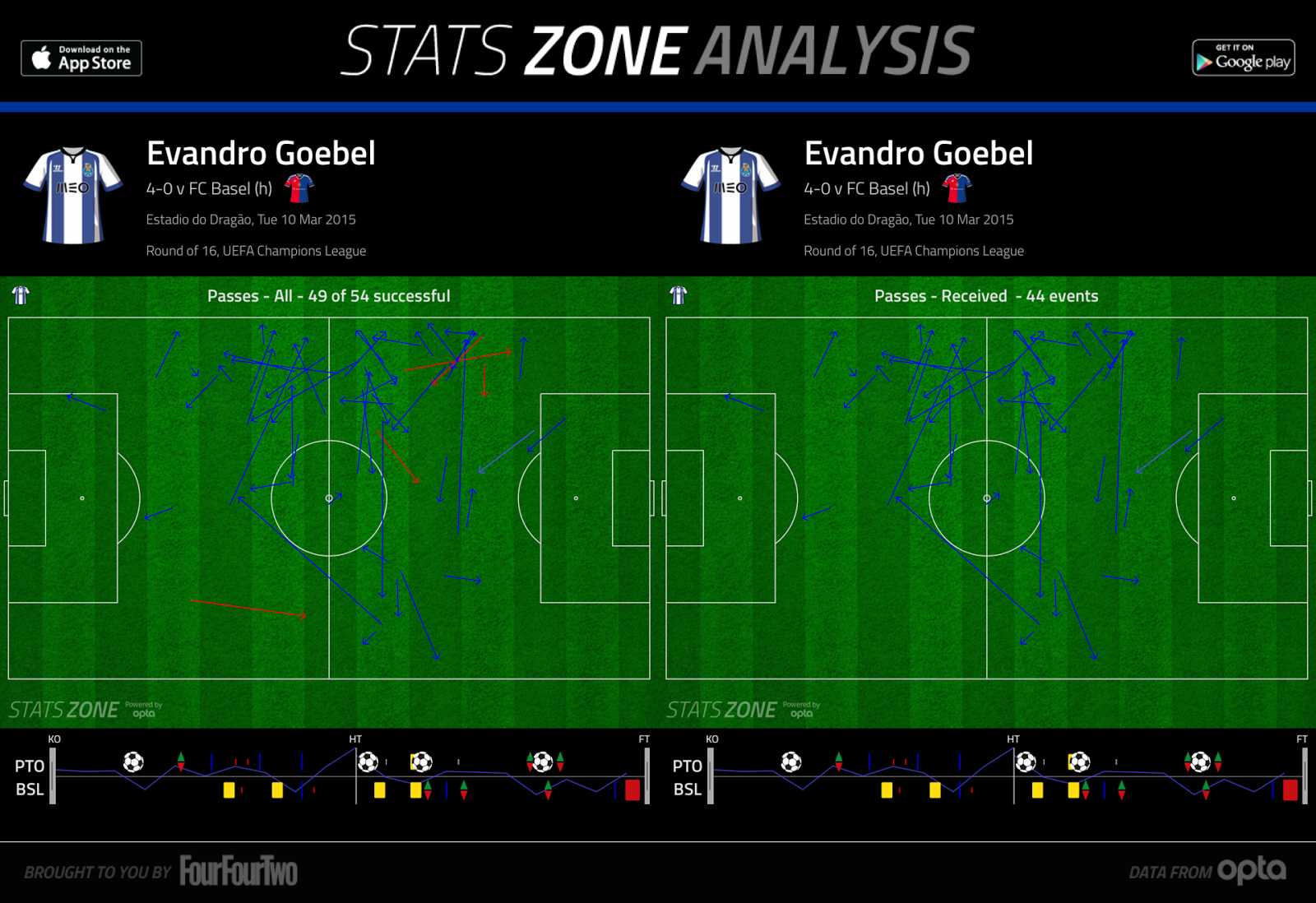 One of the knock-on effects of the proximity between FC Porto players while attacking was that they were able to immediately get close to the ball when it was lost and stop FC Basel from getting their counterattacking groove on. Therefore, the defence consequently looked more solid, even though it was comprised of (almost) the same players doing the very things they've been doing so far. The difference was in the much tighter shielding.

Casemiro was one of the key players for that effective shielding, patrolling the area in front of his defence when necessary, but - more crucially - playing closer to his midfield team-mates, which allowed him to exert counterpressing and winning the ball back on numerous occasions (green diamonds stand for ball recoveries and green crosses stand for tackles won). 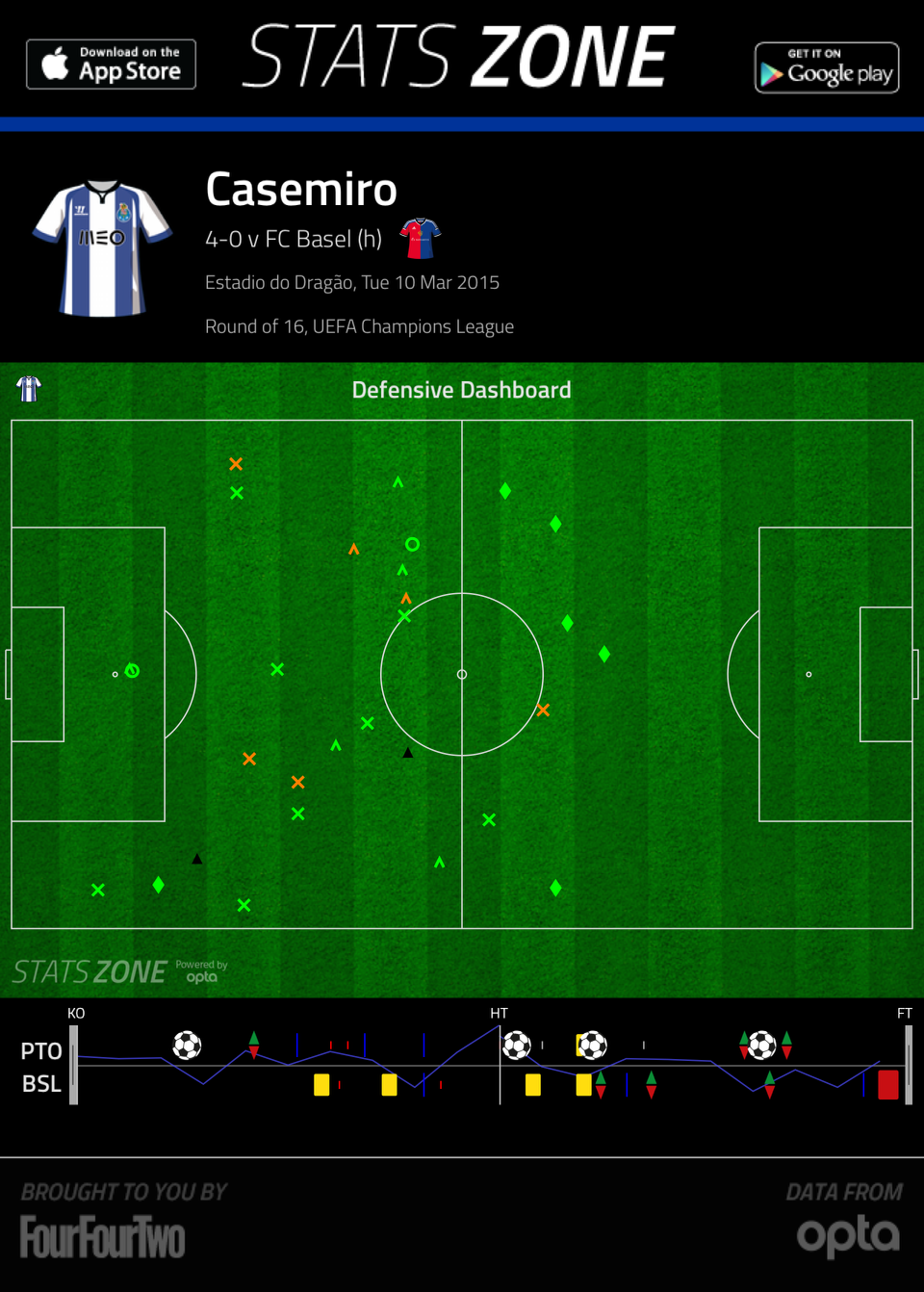 FC Porto were on one hand much quicker to react to giving the ball away. But, on the other hand, they were also able to time their pressing much better than in times past, successfully pinning FC Basel at the back and robbing them of the necessary time to breathe and impose their own passing, high-pressing game. 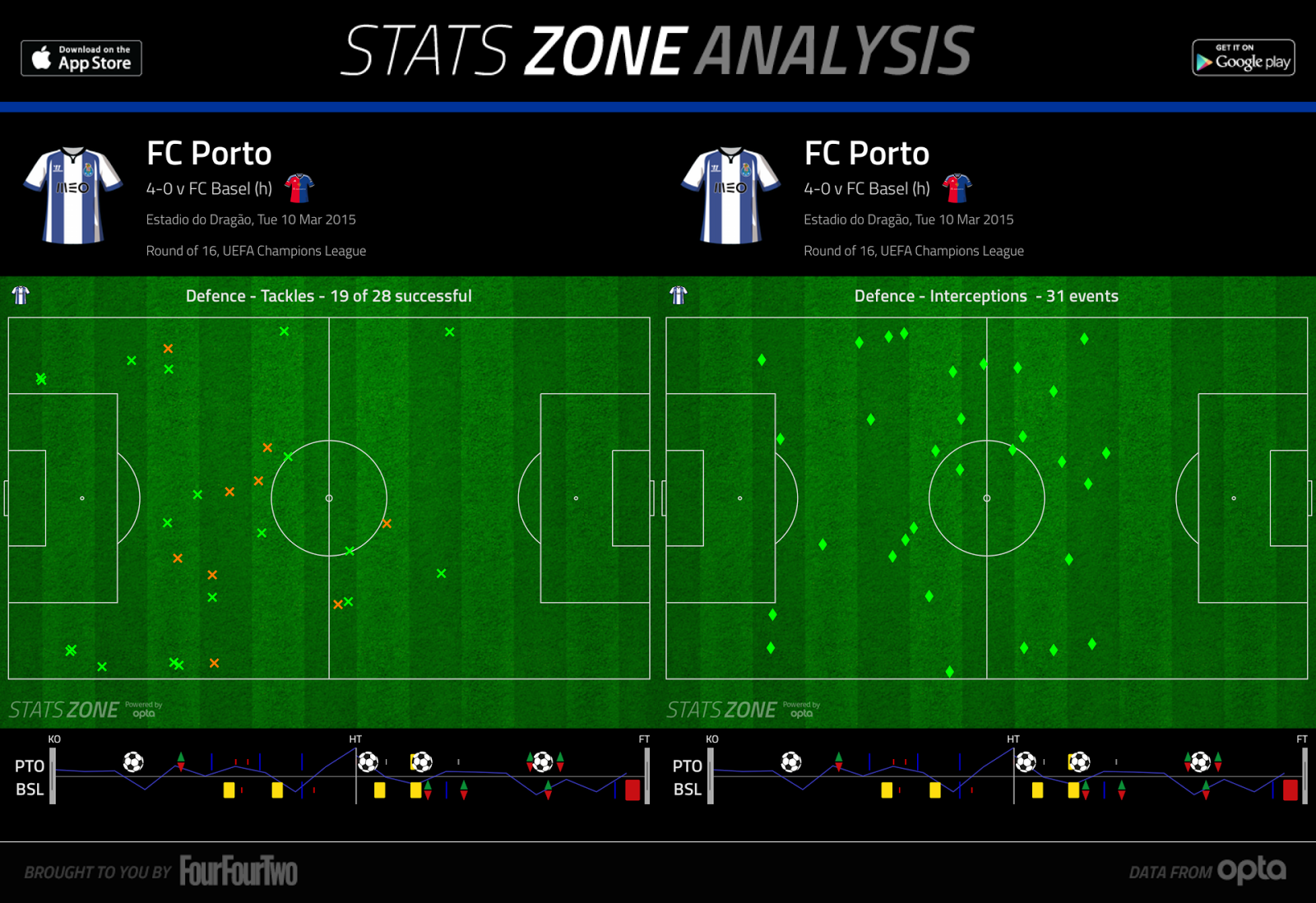 When compared to the first leg, it's not exactly hard to see the different approach in defence as well, with the centre much less exposed and the number of ball recoveries (green diamonds) and tackles in the centre increasing dramatically. By winning the ball back in such advanced, central positions, FC Porto were able to create danger simply through better positioning - thus proving once again that the game's fluidity makes it hard to tell attack and defence apart. 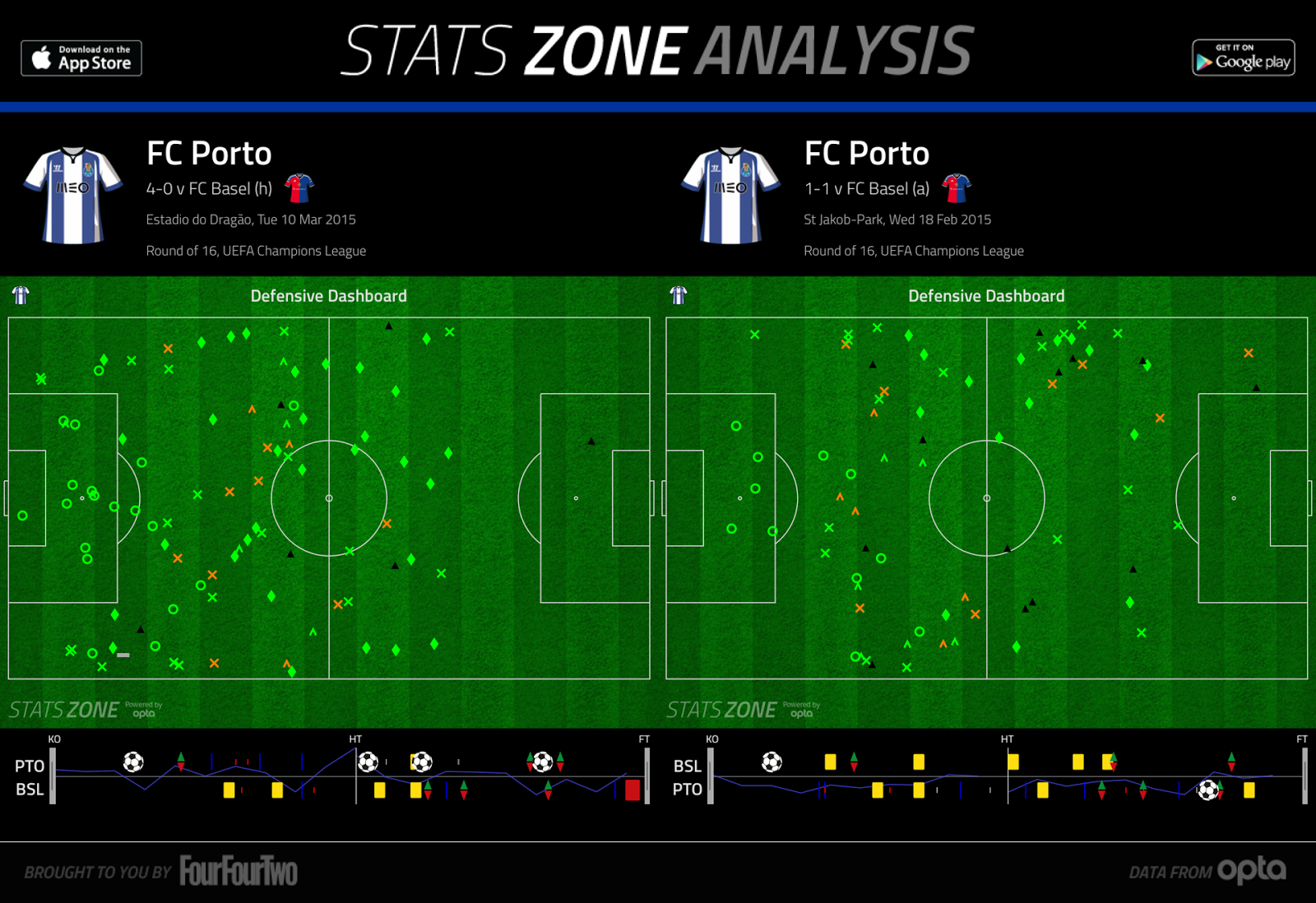 Posted by Vasco Mota Pereira at 12:16 AM